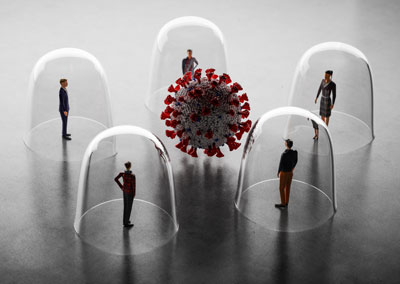 Results of a recent survey by the U.S. Bureau of Labor Statistics (BLS) provide some insights about South Dakota business responses to the COVID-19 pandemic. The U.S. Business Response to the Coronavirus Pandemic survey was conducted by BLS from late July through the end of September 2021.

It is important to note only private establishments were surveyed; government-operated agencies and schools at the federal, state and local level were not included.

Other survey items regarding changes in pay directly related to the pandemic delved into temporary wage premiums for working during the pandemic (such as hazard pay, hero pay or an hourly bonus). Just 4.8% of South Dakota private establishments reported such pay increases. This was just slightly slower than nationally, where 5.5% said they had paid such premiums.
The table below shows the percentage of establishments having made various types of pay changes because of the pandemic. South Dakota data and national data are included for comparison.

Although state detail by industry and employer size class is not available for comparison, on the national front, the Accommodation and Food Services industry supersector had the largest percentage (45.8%) of establishments indicating they had made changes in pay because of the pandemic. In second place was the Health Care and Social Assistance supersector, with 34.8% of establishments having made changes in pay. Not surprisingly, the nation’s largest employers (those with 1,000 or more workers each) was the employer size group with the highest percentage (57.5%) indicating they’d made some changes in pay because of the pandemic.

When asked if they expect increases in telework for some or all employees to continue after the pandemic, more than half (56.2%) of South Dakota establishments said yes. Nationally, 60.2% of establishments expect telework to continue.

Looking at detail available by industry (available at the national level only), the Educational Services industry sector reported the highest percentage (62.7%) of establishments increasing telework for some or all employees. This is not surprising, given the prevalence of distance learning practices implemented across the country in for students ranging from pre-kindergarten through postsecondary. Having nearly as of high of percentage (60.9%) was the Information sector. It stands to reason the industry which revolves around distributing information and processing data electronically would utilize its own technology to keep employees working, remotely, while maintaining social distancing during the pandemic. Also not surprisingly on the other end of the spectrum, the nation’s Accommodation and Food Services industry supersector reported the lowest percentage (3.6%) of establishments which increased telework for employees.

The survey also included several questions about having offering various types of employee flexibilities during the pandemic, such as flexible or staggered work hours, compressed or alternative work schedules and job sharing. About a quarter of South Dakota establishments (24.6%) reported having begun offering such flexibility since the start of the pandemic, compared to slightly over a third (34.5%) of establishments nationwide. Although comparable state-specific data is not available, not surprisingly, national results of the survey show for the most part, the larger establishments are, the more likely they were to have started offering flexible or staggered work hours to employees.

The table below shows the percentage of South Dakota establishments which began offering each type of employee flexibility as a result of the pandemic, along with national data for comparison.

A portion of the Business Response to the Coronavirus Pandemic survey questions were devoted to the pandemic’s impact on physical space used for work. One question asked if the business had decreased its square footage of space because of the pandemic. Just 3.1% of the state’s establishments indicated they had reduced their footprint, compared to 5.5% nationally.
Next, employers were asked if they expect their business will change its square footage within the next year. Just over 2% of South Dakota establishments said they think they will change their square footage, compared to 4.0% nationally.

Businesses were also asked if they had relocated during the pandemic. Response options were designed to shed additional light on where relocation took place:

Across the nation, 3.9% of establishments chose the first option, indicating they had moved within the same city or county. Just a slightly smaller portion (3.4%) of South Dakota establishments used this response.

Nationally, 1.3% of establishments used the second response option, indicating they moved to a different city or county but remained in their own state. The South Dakota percentage was even lower, less than 1%.

On a national level, a very small portion 0.6% of establishments reported having moved to a different state as a result of the pandemic. It was even smaller in South Dakota. Keep in mind, this was still more than 52,000 businesses across the nation relocating to a different state during the pandemic. Although data is not available on which states businesses relocated to, this may be a positive indicator for South Dakota, given our positive business climate. The states with the largest percentages of establishments relocating to other states were the District of Columbia, Idaho and New Mexico.

Businesses surveyed were also asked about use of different types of labor (independent contractors, temporary help agencies, etc.) during the pandemic. As shown in the table below, a very small percent of establishments nationally reported using such facets of labor supply, and an even smaller percentage did in South Dakota.

Survey respondents were asked to indicate if they use any of various types of automation, from self-service kiosks (including those to order and pay for food) and voice-recognition-based customer service/automated online chats with customers to industrial robots or management systems for packaging goods for shipment. Only 2.8% of South Dakota establishments reported using such automation, compared to 4.2% nationally. If you are interested in detailed results of this related survey questions regarding automation plans, please contact us.

A survey designed to gather data about employer responses to the COVID-19 pandemic would have been remiss without including questions about the disease itself. The first directly related survey question asked if the business currently required some or all employees to routinely wear a face covering or any protective gear while they are on-site.

Nationally, a majority of establishments (58.3%) responded positively, indicating they required employees to wear protective gear of some type. In South Dakota, 27.2% indicate they had this requirement. South Dakota ranked lowest of all states in this percentage, behind neighboring North Dakota where 28.8% of establishments reported requiring face coverings or some type of protective equipment.

Survey participants were also asked if they required some or all employees to get a COVID-19 vaccination before reporting to the work-site. Again, South Dakota ranked low with a percentage of 4.4%. Only North Dakota ranked lower, with 4.3% of establishments indicating they required vaccination. Nationally, the rate was 17.5%. Puerto Rico had the highest percentage of establishments which required employees to receive COVID-19 vaccination, at 65.8%. California was next in the rank, but at about half that percentage, 32.3%.

A little more than a third (35.8%) of the nation’s establishments reported they had received a federal or state government coronavirus-related loan or grant tied to re-hiring or maintaining employees on the payroll after January 1, 2021. A little less than a third (30.8%) of South Dakota establishments indicated they had received such a loan or grant.

With the final item, the survey posted the question, “If this business location received any type of coronavirus-related loan since the onset of the pandemic, has the loan been converted to a grant?” This is one of the few places where South Dakota outpaced the nation, with 62.3% of establishments reported having received loans that have been converted to a grant. The national rate was 54.0%. South Dakota ranked fourth in its conversion of such loans to a grant, behind North Dakota (66.0%), Puerto Rico (64.7%) and Vermont (62.8%).

For more information (including national results by industry supersector and size class) gathered through the Business Response Survey, please contact us or visit the BLS website.