Women in the Workforce

From Susan B. Anthony fighting for women’s voting rights to Amelia Earhart’s first solo flight across the Atlantic Ocean and Sandra Day O’Connor’s confirmation to the U.S. Supreme Court, there have been countless groundbreaking contributions throughout the years from courageous women from around to world and all different facets of life. These pioneers broke through barriers in politics, sports, arts, military and science, paving the way for all women to prosper. 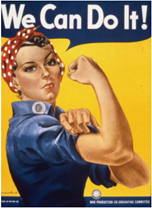 Women have worked hard to find their place in the workforce. Rosie the Riveter became a symbol of that during World War II when women were being recruited into the workforce to fill the gaping holes in the industrial workforce left by men heading off to war. Although women had been joining the work force in greater numbers since The Great Depression, between 1940 and 1945, during WWII, the percentage of female workers in the U.S. workforce increased from 27% to nearly 37%. WWII also opened the door for women to work in more types of jobs. Rather than the traditional occupations such as nursing and teaching, women had the opportunity to work in production of military goods, agriculture, business and government. However, with the return of the soldiers, many women were pressured to return to pre-war activities and jobs.

Nearly 72% of women work in four of the 13 industry sectors listed in the table below. The largest share work in the Education and Health Services, which employs 41.8% of working women in South Dakota. Education and Health Services includes establishments that provide instruction and training as well as those that provide health care and social assistance. The remaining three industries which each employ around 10% of the women’s workforce include Wholesale and Retail Trade at 10.8%, Financial Activities at 9.7%, and Leisure and Hospitality at 9.4%.

Women continue to solidify their importance in the workforce by continually entering industries and occupations previously filled more commonly by men. For more detailed industry and occupational data for women in the workforce, please see U.S. Census Bureau American Community Survey data using the links below.

Employment by Industry and Sex

Employment by Class of Worker (private, government, etc.) and Sex

Earnings by Occupation and Sex

Earnings by Industry and Sex