Nov. 11 is a day reserved to celebrate a distinct group of people—a group of people who answered the call of service to their country and were willing to make the ultimate sacrifice for the freedom of others. Veterans Day originally began In November 1919 under President Wilson. It was initially called Armistice Day and was intended to commemorate the temporary cessation of hostilities between the allied nations and Germany, ending World War 1. Armistice Day was made a legal holiday in 1938 and was later changed to Veterans Day in 1954, becoming a day to honor military veterans who have served in any of the United States Armed Forces.

Veterans are a small but vital demographic of our labor force because they tend to be hard-working, motivated and ethical employees. Veterans have an accelerated learning curve due to transferable skills from their time in the service, including advanced leadership, teamwork and group productivity. They also have immense respect for procedures and value accountability. Many employers look to hire veterans first because of these qualities, which is evident when looking at labor force statistics for South Dakota and the nation.

According to the Current Population Survey (CPS), a survey conducted by the Bureau of Labor Statistics on behalf of the U.S. Census Bureau, in 2019 South Dakota was home to approximately 61,000 veterans 18 years of age and older. This equates to 9.3% of that population. The CPS measures the civilian non-institutionalized population; this includes person who are not inmates of institutions such as penal and mental facilities or homes for the aged, and who are not on active duty in the Armed Forces.

The 2019 labor force participation rate of South Dakota’s veteran population was 57.0%, which was the 4th highest behind Virginia at 62.2%, Maryland at 61.9% and Alaska at 57.1%. The nonveteran labor force participation rate in South Dakota over this same time period was 71.9%. The veteran and nonveteran rates refer to population 18 years and over. 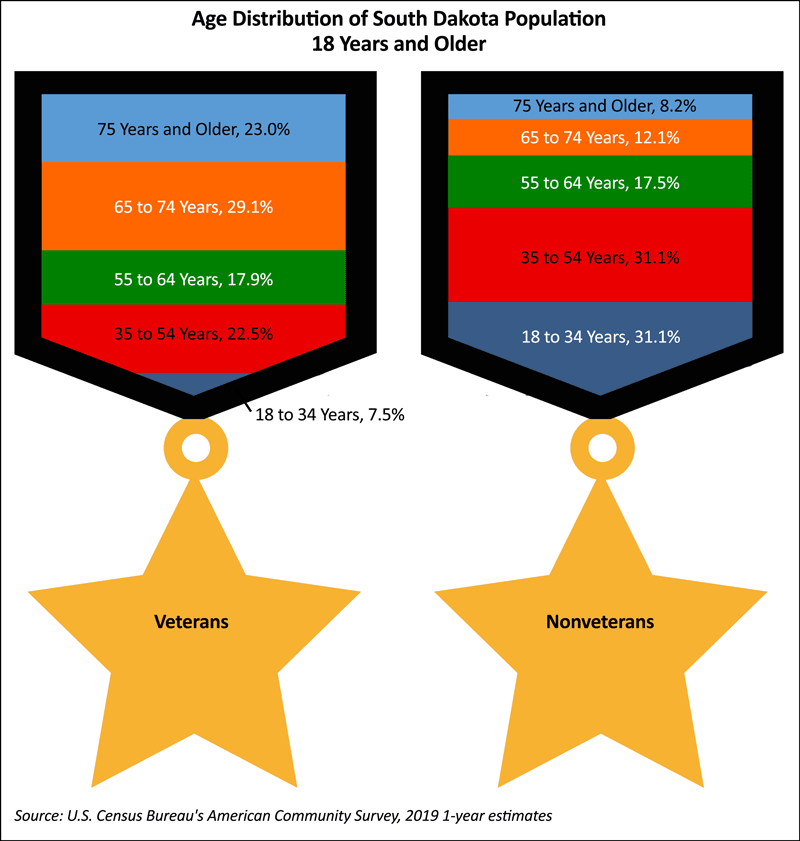 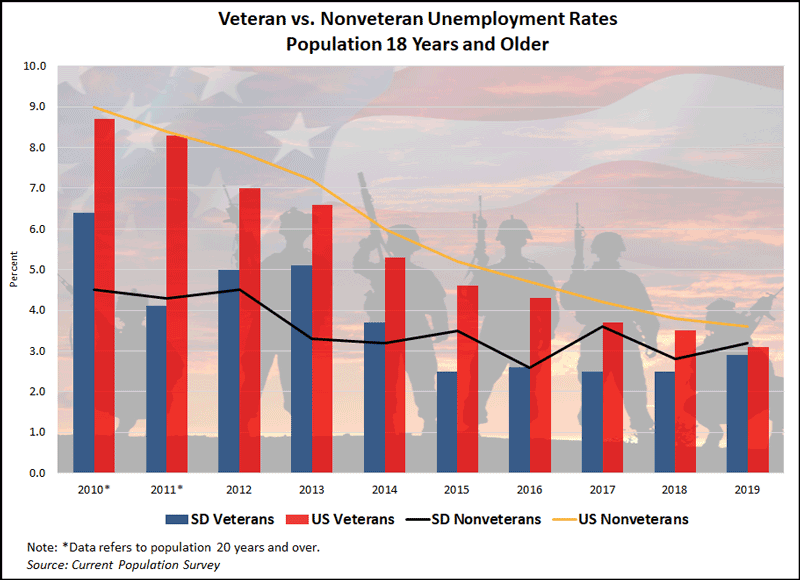 Veterans have served our country well, which is why we celebrate them on Veterans Day. These brave men and women sacrifice so much when they put on the uniform and are owed the utmost respect and gratitude. As a small token of appreciation, several resources have been established which can be useful for both veterans and employers who wish to hire veterans, to help them accomplish their goals. The federal government uses veteran preference points to give veterans slight preference in the hiring process but does not guarantee employment. State and local governments give preference to veterans who meet certain criteria by granting a guaranteed interview if the applicant is qualified for the position, but it does not promise them the job.

The Department of Labor and Regulation’s Job Service offices have employment specialists who are knowledgeable about programs available to assist veterans in their job search. To learn more about veteran employment benefits or hiring a veteran, visit our Veterans page or contact your nearest Job Service office for more information.

Editor’s note: Mandy’s husband, Aaron Walberg, is one of South Dakota’s 61,000 veterans to be celebrated Nov. 11. We express our gratitude to Aaron and all veterans for their service, and to their families for the sacrifices they make as well. We wish all South Dakotans a happy and meaningful Veterans Day.