Unless otherwise noted, the following highlights are based on a comparison of annual average data for 2018 and 2019. 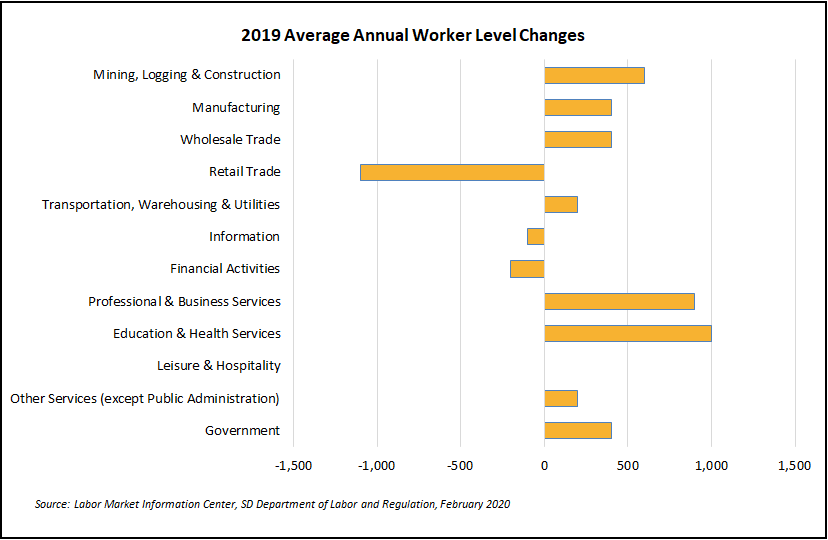 Manufacturing continued an upward trend, adding 400 workers (0.9 percent) from 2018 to 2019. The Sioux Falls and Rapid City MSAs showed growth over the year, adding 200 workers (1.4 percent) and 100 workers (3.6 percent), respectively. Statewide Non-Durable Goods Manufacturing had a 3.8 percent growth with the addition of 600 workers. Non-durable goods are immediately consumed in one use or have a lifespan of less than three years. Examples of non-durable goods produced or processed in South Dakota include food and beverage products, paper products and fuel. Durable Goods Manufacturing dropped 100 workers (0.3 percent) to a 2019 annual average of 28,600 workers. Durable goods produced in South Dakota include items such as trailers, furniture and electronic equipment. Growth in Manufacturing can be attributed to South Dakota’s favorable business climate, which includes no corporate income tax and no business inventory tax.

Wholesale Trade had a 1.9 percent increase with the addition of 400 workers. This sector went from a 2018 annual average of 20,800 to a 2019 annual average of 21,200. The Wholesale Trade sector consists of establishments engaged in wholesaling merchandise and rendering services incidental to merchandise. The merchandise in this sector consists of the outputs of agriculture, mining, manufacturing and certain information industries like publishing.

Retail Trade had the largest decrease with a loss of 1,100 workers (2.1 percent). The retail landscape is constantly evolving with advancements in technology. As some establishments continue to increase their online presence, others have stepped away from store front locations. Online shopping has also evolved as some stores offer opportunities to shop on social media or offer quick delivery options, changing the way consumers shop for items. Clothing boutiques, web retailers, home furnishing stores, department stores, hardware stores, supermarkets, gasoline stations, antique shops and souvenir stores are examples of some of the establishments in this sector. As technology continues to advance and online shopping continues to grow, the demand for workers may continue to decline.

Transportation, Warehousing and Utilities added 200 workers (1.5 percent) over the year, reaching a 2019 annual average of 13,700 workers. Examples of establishments in this industry include tow truck services, natural gas distribution, taxicab services, local and long-distance trucking, scheduled air passenger transportation and general warehousing. Transportation and warehousing accommodate the needs of Wholesale Trade and Manufacturing. As Wholesale Trade and Manufacturing increase, so does the demand for workers in Transportation, Warehousing and Utilities.

The Information sector continued a downward trend with the loss of 100 workers (1.8 percent). The Information sector is comprised of establishments engaged in publishing, internet publishing, motion picture and sound recording, broadcasting, telecommunications, internet service providers, data processing and all other information services. As technology continues to change so does how people receive their information. For example, users are able to look online for news updates or turn to social media for birthday invites versus traditional print methods. The slight decrease in workers may be attributed to gains in technology and reduced consumer demand.

Financial Activities had a drop of 200 workers (0.7 percent) over the year to a 2019 annual average of 29,000 workers. Over half of the workers in the Financial Activities supersector are located in the Sioux Falls MSA (15,800 workers). Credit card banks, commercial banks, portfolio fund managing, insurance claims adjusting, real estate agencies, residential property management and home health equipment rental are examples of establishments in this supersector. Mobile banking and advances in automation have continued to change the landscape of Financial Activities. Consumers are able to complete many financial activities with 24/7 access, including deposit checks, transfer funds and apply for loans. Losses in Financial Activities may be related to restructuring as some establishments adapt to ongoing advancements.

Education and Health Services had the largest over-the-year increase with a gain of 1,000 worker (1.4 percent). Education and Health Services make up 16.7 percent of the nonfarm workforce with a 2019 annual average of 73,500 workers. Health Care and Social Assistance accounted for majority of this growth with the addition of 900 workers (1.4 percent). Hospitals added 300 workers (1.2 percent) from 2018 to 2019. The continued growth in Health Care and Social Assistance is related to several factors, including an ongoing rise in new medical procedures and continued population growth which require additional staff. The U.S. Census Bureau estimated South Dakota’s population at 884,659 in July 2019 compared to 882,235 in July 2018. Educational Services remained unchanged over the year with a 2019 annual average of 7,400 workers. This number includes private educational services, as public educational services are included in government worker levels.

Leisure and Hospitality remained unchanged from 2018 to 2019 with an annual average of 47,300 workers. Worker level trends for this sector have been fairly consistent, typically peaking in August and reflecting lower levels during January and February. Establishments included in this supersector include performing arts, museums, parks, hotels and restaurants. According to the South Dakota Department of Tourism, 14.5 million visitors traveled to South Dakota in 2019 compared to 14.1 million visitors 2018. Despite an influx of visitors to South Dakota, advancements in technology may have played a part with worker level demand. Phone apps to order food or make hotel reservations, along with kiosks to order are just a couple of the examples of technology advancements which may affect worker levels.

Other Services (except Public Administration) had a 1.2 percent increase with a gain of 200 workers from 2018 to 2019. This sector went from an annual average of 16,700 workers in 2018 to 16,900 workers in 2019. As population continues to increase, so does the demand for workers who provide a wide variety of services in this sector, including car repair, hair styling, dry cleaning, car washes and religious services. 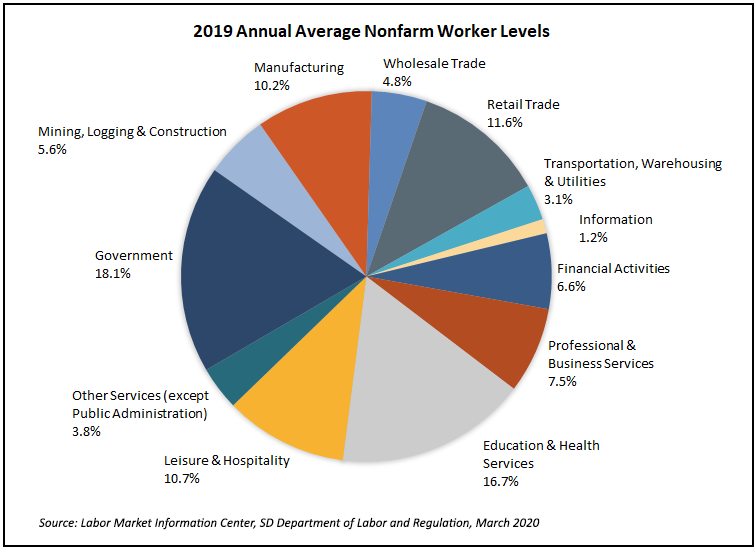 About the source of nonfarm wage and salaried worker data

The Current Employment Statistics (CES) program is a monthly payroll survey of non-farm establishments. LMIC conducts the CES program in South Dakota, in cooperation with the U.S. Bureau of Labor Statistics (BLS). CES provides current estimates of employment, hours and earnings by industry for the nation, states and MSAs. South Dakota is home to two MSAs, including Rapid City (Custer, Pennington and Meade counties) and Sioux Falls (Lincoln, McCook, Minnehaha and Turner counties). CES surveys nonfarm establishments for the total number of persons on payrolls employed who worked or received pay for any part of the pay period including the 12th day of each month. CES does not include agricultural workers, self-employed, workers in private households, members of the armed forces and unpaid family members.

Each year, nonfarm estimates are benchmarked using data from other sources that were not available at the time of estimation. In this process, BLS revises the estimates to realign with data available from the Quarterly Census of Employment and Wages (QCEW) program and to account for Noncovered Employment (NCE) data. NCE data includes workers who are exempt from state Reemployment Assistance (RA) tax laws and are not counted by QCEW but are included in the definition of CES employment. Examples of NCEs include student workers, elected officials, railroad employees and religious organizations. The nonfarm data was recently benchmarked, and the revised estimates replaced previously published nonfarm data.