Last month’s article covered occupational employment growth projected through 2026 and focused on those occupations projected to grow the fastest. However, growth is only one portion of the demand for workers in each occupation. In fact, when considering future workforce needs, employment growth is a relatively minor factor in the number of workers who will be needed. The second component of demand is created when workers leave one occupation for a job in another occupation or leave the workforce entirely.

The methodology used for employment projections at the national level and by all state agencies like ours is developed by the U.S. Bureau of Labor Statistics (BLS). Use of the BLS methodology ensures not only statistically sound, reliable data, but also allows for comparability of the data among geographic areas.

BLS continuously strives to improve the methodology to ensure projections are accurately reflecting the dynamics of the current labor market. This latest improvement to the BLS methodology allows for a more comprehensive measure of the demand for workers. National employment projections for 2016 to 2026 based on the new methodology were released in October 2017; state projections were rolled out in June 2018.

Prior to the 2016-2026 occupational projections round, the BLS methodology focused on replacement demand created by workers exiting the labor force completely—for reasons such as retirement and death. The workforce has evolved tremendously over the last 20 years, and workers leave an occupation for reasons other than retirement, such as changing careers, being promoted into management or completing a training program to enter a different occupation. “The once-traditional career path of entering an occupation at a young age and working until retirement in the same occupation is no longer the norm for American workers,” said Michael Wolf, chief of the Division of Occupation Employment Projections at BLS. “Now, it’s common for workers to work in a number of occupations throughout the course of their career.”

An example of the revised methodology in action:

Meet Hannah. During high school, Hannah worked part time as a waitress for two years at her hometown café. After graduating from high school, Hannah got hired as a receptionist at a regional medical center in a city close to her hometown. After three years, she decided to further her education at a local university and enrolled as a full-time student. After earning her bachelor’s degree and passing her nursing exam in five years, she was licensed as a registered nurse and was hired at the medical center she worked at before getting her degree. Hannah works as an RN for the next 15 years. During those 15 years, Hannah took online and night courses from the local university and received a master’s degree in business management with an emphasis on medical health management. Hannah moved back to her hometown to accept a position as the medical and health services manager of the assisted living center and nursing home. She worked as the manager of these facilities 12 years. After 37 years, Hannah decided to semi-retire and worked part-time as a bookkeeping clerk at an insurance agency for seven years before retiring completely.

Hannah held jobs in five different occupations over the course of her 44-year career. Each time Hannah left an occupation, she created an opening her former employer had to fill with another worker. Every person’s career journey varies, but certain trends are common.

How has the new methodology impacted projected occupational outlook?

First, the number of projected job openings (using the new separations methodology) in South Dakota is now nearly five times as high as under the former methodology. Nationally, projected job openings are now approximately four times higher than with the prior methodology. The primary reason for the sharp increase in annual demand is the occupational transfer component of the methodology. This is logical because occupational transfers are more likely to occur more than once in a 10-year projections cycle, whereas exits from the labor force (which was the extent of the replacement demand the prior methodology measured) are not as likely to occur more than once.

As the pie graphs below illustrate, nearly all of South Dakota’s annual demand for workers during the 2016-2026 projections decade will be from either occupational transfers or labor force exits; 53 and 41 percent, respectively. About six percent of the state’s projected annual openings are projected to be new growth. South Dakota percentage breakout of annual demand virtually mirrors that of the nation for the 2016-2026 projections period. The only slight difference is the state’s labor force exit rate is one percent higher than the nation. This is most likely due to the state’s large pool of older workers. 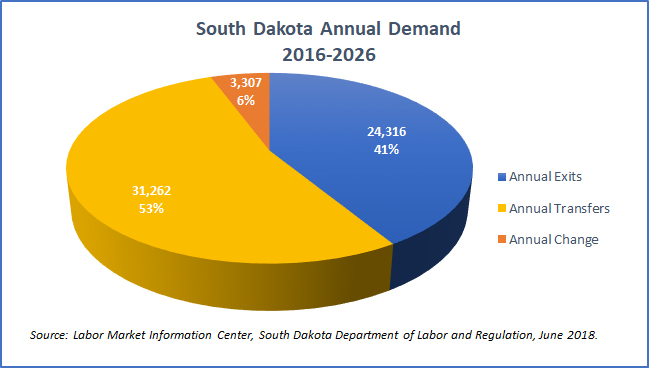 In 2016, 50.3 percent of South Dakota’s civilian noninstitutionalized population age 55 and over were in the state’s labor force, compared to 40 percent nationally. As this population continues to age over the 10-year-projection period, some of these workers will retire--thereby exiting the labor force. 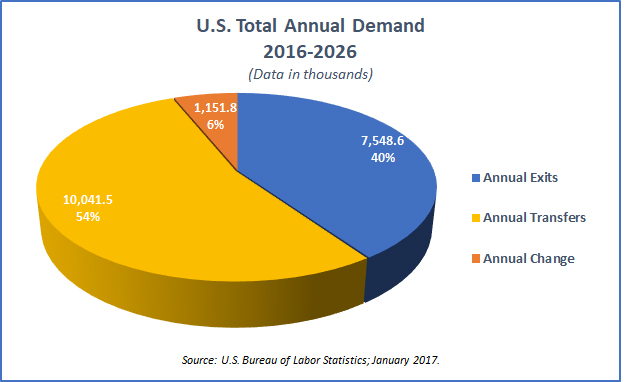 With the new projections methodology, worker attachment or lack thereof to an occupation now plays a much larger role in projected demand for workers in the occupation. Some occupations naturally have more worker transfer than others. In this section, we will take a closer look at those South Dakota occupations with high transfer rates and those with lower transfer rates and explore reasons why they vary so greatly.

Many of the occupations with high occupational transfers also lean toward either part-time, seasonal and/or flexible scheduling, which makes them the perfect job for workers more loosely tied to the labor force, i.e. young and older workers and or those working part time. Many of these occupations also tend to require a minimal amount of training and less extensive skills than other occupations.

With a few exceptions, most of the occupations with the greatest demand due to occupational transfers are transitory in nature. By transitory, we mean these occupations tend to work well as stepping stones for employees who plan to be in the occupation for a brief time, want or need part-time work, or simply need basic work experience.

Young, those who just want part-time employment and older workers tend to gravitate to these occupations. Younger workers tend to take these occupations because there are many openings and they can work flexible hours (which works well for those who are advancing their education). Workers who prefer part-time hours, either to meet family obligations (i.e. staying at home to attend to young children or aging/ill relatives) and older workers who are ready to leave the stress associated with their “career employment” but who still want to be active in the labor force are also primary players in these types of occupations.

There are a couple of occupations with projected high demand due to occupational transfers which, for one reason or another, don’t seem to fit the mold we’ve mentioned so far. Customer service representatives is one.

Customer service representatives provide information in response to customer inquiries about products and services, and handle and resolve their complaints. Because workers in this occupation must be available when customers need assistance, many work nights, weekends and holidays. These hours can be a double-edged sword for this occupation. On one hand, the non-traditional work hours offer flexibility allowing workers to meet other obligations of their time, but these same hours often lead current workers to find other occupations which offer holidays, nights and/or weekends off. In addition, workers in these occupations tend to advance to higher positions—often within the same company. And, finally, people who work as customer service representatives experience “burn out” because dealing with unhappy customers can be stressful.

Why does this occupation have such a high degree of worker transfer? First, and perhaps foremost, is the work schedule. These truck drivers travel great distances, often being gone several days on end, including weekends and holidays. This occupation is also stressful. Not only do truckers travel unfamiliar roads in sometimes heavy traffic and adverse weather conditions, but they also are required to maintain travel logs, ensure weight of their vehicles comply with state and federal regulations and ensure their product is delivered on schedule. Occupational “burn-out” for heavy and tractor-trailer truck drivers is high, which leads many workers to move on to other occupations.

So, do all occupations experience high worker transfer? No. Let’s take a look at some occupations with relatively low transfer rates.

Occupations which require a greater investment of time and money to prepare for see fewer transfers. Among South Dakota occupations with the lowest projected demand due to occupational transfers are several healthcare occupations, including Oral and Maxillofacial Surgeons, Dentists, Pediatricians, Anesthesiologists and Psychiatrists. These occupations require advanced education and training; it stands to reason workers will not be as likely to leave these occupations in which they are so heavily invested.

Occupations which are, or become, something the worker is passionate about also experience low annual transfer rates. The old adage, “Do something you love, and you’ll never work a day in your life” seems to hold true—at least as far as occupational transfers are concerned. For example, more of South Dakota’s occupations with the lowest occupational transfer rates are artistic occupations—craft artists and art directors. To a large degree, workers are drawn to occupations like craft artist, art director or other type of artist by their unique creative abilities and get great intrinsic reward from sharing those gifts with customers who truly appreciate their remarkable talents. In most cases, they would be challenged to find such reward in many other occupations.

The projected occupational demand information to 2026 recently completed for 546 detailed occupations in South Dakota is available in our virtual labor market data system. Please visit the LMIC website at dlr.sd.gov/lmic and choose Employment Projections by Occupation for our menu page with links to and tips on using the virtual site, plus links for related occupational descriptions and technical notes about the projections.